Rebel Thaiboxing at the US Muay Thai Open!

10 fighters, 17 fights, 2 knockouts and 3 championship belts! What a weekend! We had visitors from all over north america and 2 of them came out victorious! Congrats to Janet Todd from Boxing Works(California) and Vanessa de Belen from Kombat Arts(Canada) for winning new titles at this years 2017 US Muay Thai Open East Tournament! Congrats to the rest of the fight team who all handled themselves putting up great opposition to the best fighters in the country! #champion #rebel

Say hello to Rebel Thaiboxing's newest Champion! At the tender age of 17 years old Annika takes the US Muay Thai Open 119lbs Junior Championship! Annika in her first fight stepped into the ring vs a more experienced opponent and utilized her long reach to control the fight. Annika scored numerous body and head kicks in the 1st and 2nd rounds followed by long knees. IN the 3rd round she continued to control the distance also using boxing and teeps. Lookout for this young lady 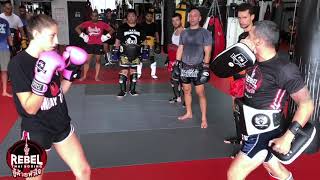